Mirror Bible: A selection of key New Testament texts paraphrased from the Greek 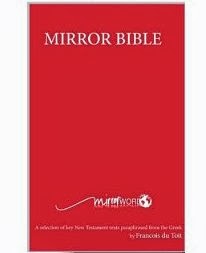 Part of John, and most of the epistles.

The incarnation is the most accurate and articulate translation.

Any sincere student of classical music would sensitively seek to capture and interpret the piece so as not to distract from the original sound of the composition.

To form an accurate conclusion in the study of our origin would involve a peering over the Creator's shoulder as it were, in order to gaze through his eyes and marvel at his anticipation. His invisible image and likeness is about to be unveiled in human form.

The incarnation celebrates the fact that the destiny of the Word was not the page but tangible human life! The word of truth accurately preserve's God's original idea in the resonance of our hearts.

People who have stopped reading the Bible or never even read it before say about The Mirror, "I have never read anything that touched me so deeply, it is a brand new Bible, I cannot wait to give it to all my friends!"

The Mirror Bible is a paraphrase from the original Greek text. While the detailed shades of meaning of every Greek word have been closely studied, this is done taking into account the consistent context of the entire chapter within the wider epistle, and bearing in mind the full context of Jesus as the revealer and redeemer of the image and likeness of the invisible God in human form, which is what the message of the Bible is all about.

To assist the reader in their study, the author have numerically superscripted the Greek word and corresponded it with the closest English word in the italicized commentary that follows. This is to create a direct comparison of words between the two languages. Many words used in previous translations have adopted meanings in time that distract from the original thought. Individual words can greatly influence the interpretation of any conversation.

For years deliberate as well as oblivious errors in translations were repeated and have empowered the religious institutions of the day to influence, manipulate and even abuse masses of people. Consider the word metanoia, consisting of two components, meta, together with, and nous, mind, suggesting a radical mind shift. This word has always been translated as "repentance," which is an old English word borrowed from the Latin word, penance. Then they added the "re" to get even more mileage out of sin consciousness. Re-penance. This gross deception led to the perverted doctrines of indulgences, where naive, ignorant people were led to believe that they needed to purchase favor from an angry god. Most cathedrals as well as many ministries were funded with guilt money.

The Bible is a dangerous book! It has confused and divided more people than any other document. Scriptures have been used to justify some of the greatest atrocities in human history. People were tortured, burned to death and multitudes murdered based on somebody's understanding of the scriptures!
Jesus, Paul and believers throughout the ages faced their greatest opposition from those who knew the scriptures. If it is such a dangerous document, how does one approach the book? The Mirror unveils the Incarnation Code as the key that unlocks the mystery message of scripture.

The romance of the ages is revealed here.