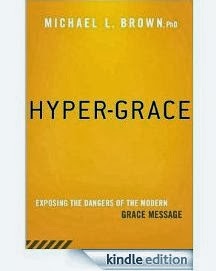 Personally, I think Dr Brown is largely missing the boat on this one: I don’t hear anybody preaching FOR what he’s preaching against, though they’re probably out there somewhere, if you look hard enough. But if you can eat the meat and spit out the bones, you will likely find a good foundation for Grace here.

At a time when the church needs an urgent wake-up call and a fresh encounter with Jesus, the hyper-grace message is lulling many to sleep. Claiming to be a new revelation of grace, this teaching is gaining in popularity, but is it true? Or is the glorious truth of grace being polluted by errors, leading to backsliding, compromise, and even the abandonment of faith?

Hyper-Grace looks at the major teachings put forth by many adherents of this “grace reformation” and prayerfully compares those teachings with the Word of God.

Without watering down the Bible’s true message of grace, Michael Brown gives you the facts, demonstrating the dangers of this seductive message and showing you how to keep from being taken in.

From a 5-star review: “Dr. Michael Brown's Hyper-Grace: Exposing the Dangers of the Modern Grace Message is a much needed response to the deluge of popular new grace theology in the church today. In a respectful but emphatic tone Dr. Brown interacts with a large variety of popular "grace movement" teachers and doctrines, highlighting both liberating truth and destructive error. Hyper-Grace carries out a systematic examination, asking difficult questions, examining a wealth of scriptural interpretation, and thoroughly interacting with the main tenets of new "grace theology" in a clear and engaging way.

The table of contents alone posits questions that both "grace teachers" and those examining their theology need to answer: "Has God Already Forgiven our Future Sins?" "Should Believers Confess their Sins to God?" "[Are we]Sanctified or Not?" "Is Spirituality Effortless?" "Is God Always in a Good Mood?" "Why are we Running from the Words of Jesus?" Dr. Brown's chapters also ask if the Holy Spirit convicts unbelievers and/or believers of sin and if so should we repent? and what does that mean?

The fact that many of these questions have risen means that foundational Christian teaching and understanding is being questioned. Many believers who have taken answers to these questions for granted must go back to the Word and examine why they believe what they believe. Dr. Brown quotes large portions of published works naming specific teachers and interacting with the teacher's comments themselves sometimes positively and often negatively. While I have not read every work the book interacts with, I have read some, and his approach seems fair, though critical. He acknowledges, "[grace teachers] have stated categorically that grace does not give us a license to sin. That is not the question."”

From a 1-star review: “One thing I'll give Mr. Brown credit for is that he brings attention to the gospel of grace and calls for clarification. His book is based on a fundamental flaw in teaching. In a nutshell, he's saying, "Look at these people who are walking in the flesh. This proves the grace message (aka hyper-grace) is flawed."

To put this into perspective, what would happen if we used the same method of labeling against their belief system? For example, in the last few months, two Messianic Jews have told me, "The Apostle Paul is a liar." There is a sect of Messianic Jews who completely reject the scriptures written by Paul. This eliminates 2/3 of the New Testament. Would it be fair to say, "Michael Brown is a Messianic Jew, these other Messianic Jews deny scriptures, therefore Michael Brown is guilty by association?" ”

Comment: I observe that the vast majority of Dr Brown’s recent books are about what he’s against. That much negativity, even with the best of intentions, cannot help but pollute the mind: the more you look for what you disagree with, the more you find, and the more you empower.

For contrasting view on the topic, consider Hyper-Grace, the Dangerous Doctrine of a Happy God.