Prophet, a novel about prophetic ministry 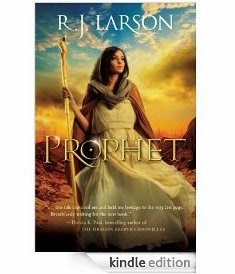 Some folks have had real trouble when God calls you to prophetic ministry. You might learn from this.

Ela Roeh of Parne doesn't understand why her beloved Creator, the Infinite, wants her to become His prophet. She's undignified and bad-tempered, and at age seventeen she's much too young. In addition, no prophet of Parne has ever been a girl. Worst of all, as Parne's elders often warn, if she agrees to become the Infinite's prophet, Ela knows she will die young.

[From a 5-star review]: “I don't normally like overtly Christian works of fiction, even though I am a Christian. Typically, I find them to be preachy and filled with unremarkable, overly-good characters, and unbelievable story lines. However, I found this book to be surprisingly fun and a good read. The writing was very good. The characters were believable and likable. And, while I *thought* I might know how things were going to end, there were enough surprises that I wasn't sure about it.”