Angels: Ringing Assurance that We Are Not Alone 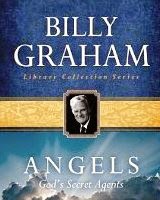 TWO BUCK BOOK: Angels: Ringing Assurance that We Are Not Alone

Yes, angels are real. They are not the product of your imagination.

“If we had open spiritual eyes we would see not only a world filled with evil spirits and powers—but also powerful angels with drawn swords, set for our defense.”

Dr. Graham lifts the veil between the visible and the invisible world to give us an eye-opening account of these behind-the-scenes agents. This best-selling classic records the experiences of Dr. Graham and others who are convinced that at moments of special need they have been attended by angels. With keen insight and conviction, Dr. Graham affirms that:

God's invisible hosts are better organized than any of the armies of man—or Satan.
Angels "think, feel, will, and display emotions."
Angels guide, comfort, and provide for people in the midst of suffering and persecution.
At death, the faithful will be ushered by angels into the presence of God.

Angels: God's Secret Agents is Billy Graham's one-volume introduction to one of the most popular spiritual phenomena of our time. Firmly grounded in Graham's close readings of scripture, Angels testifies to Graham's own encounters with the heavenly beings and also records the many similar stories that other believers have told him over the years. Graham devotes entire chapters to the questions of whether angels are visible or invisible, how they differ from men and women, and how the angelic hierarchy is organized. He also discusses the much-debated theory that UFO sightings are in fact angelic appearances.

Perhaps the primary purpose of this book, however, is to inform readers that armies of angels are ready and willing to help Christians in their daily fights against the forces of darkness. "Millions of angels are at God's command and at our service," Graham writes. "The hosts of heaven stand at attention as we make our way from earth to glory, and Satan's BB guns are no match for God's heavy artillery." Such stirring theological pronouncements are matched with practical advice for believers who wish to know the angelic powers in everyday life. --Kevin Attwood