Chuck Norris' Autobiography: Against All Odds 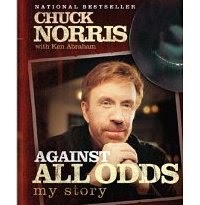 ONE DOLLAR AUTOBIOGRAPHY: Against All Odds
By Chuck Norris with Ken Abraham

A New York Times best seller. Millions of people worldwide know Chuck Norris as the star of more than twenty motion pictures, a martial arts expert, and the only man in the Western Hemisphere to hold an eighth degree Black Belt Grand Master in Tae Kwon Do. Countless others see him daily in syndicated reruns as the hero of the longest running CBS series to date, “ Ranger.”

What many don’t know is that Chuck Norris is a sincere Christian–a man whose faith plays a role in everything he does. Against All Odds is the inspirational story of how Norris overcame abject poverty from childhood, the effects of his father’s alcoholism and desertion of the family, and his own shyness and lack of strength and ability early in his life. Norris writes candidly about the past and gives God full credit for where he is today

In this autobiography, Norris and Abraham catalogue in a mostly chronological fashion the major events of Norris's Horatio Alger–like life. After a tumultuous and impoverished childhood marred by an alcoholic father, Norris turned his life around by joining the military and learning a martial art, tang soo do, while stationed in Korea. Having achieved a black belt, he returned to the and built a career as a karate instructor, winning six world championships.

Norris counted many celebrities among his students, including Steve McQueen, who, along with Bruce Lee, encouraged Norris to pursue a film and television career. Even though Norris and Abraham employ a bland style of reportage, often bereft of smooth transitions and replete with empty phrases such as "I've always had a special place in my heart for children," the facts of Norris's life make this book compelling.

Not only has he succeeded in martial arts and acting, but he has a long, eclectic list of additional achievements and experiences, such as breaking a world record in boat racing and being a close friend of the Bush family. While this book is being promoted as a Christian autobiography, Norris did not fully embrace a Christian lifestyle until the mid-1990s.

Chuck Norris doesn't actually write books, the words assemble themselves out of fear.