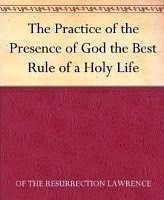 FREE BOOK: The Practice of the Presence of God
Brother Lawrence

Brother Lawrence was a seventeenth-century French monk who in his monastery kitchen discovered an overwhelming delight in God's presence. His book is a true Christian classic.

Here is one of the most beautiful and touching stories of Christian devotion ever written. Brother Lawrence was a Carmelite Brother known for his profound peace and deep relationship with God; many came to seek spiritual guidance from him. The wisdom that he passed on to them, in conversations and in letters, would later become the basis for the book.

This book was converted from its physical edition to the digital format by a community of volunteers. There will be some typo’s. Nicer versions, starting at 99ȼ, are also available, though this one does say, “This faithfully translated new edition is the most complete and comprehensive text on Brother Lawrence available.”

To know God is to love God. The more we know Him the more we are able to love Him. Brother Lawrence, a monk in the 1600s, spent many years practicing the presence of God in his life. His key to this practice was that he strove to be consciously aware of God's presence at all times. This is truly a classic in the sense that Brother Lawrence's message has survived several centuries and still inspires many individuals to purposefully enjoy God's presence in their lives. This book is one to read several times as there are many nuggets of wisdom for those who want to grow in their relationship with God.