Warren Wiersbe: The Cross of Jesus 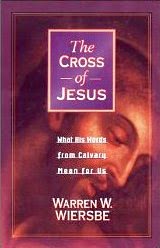 FREE BOOK: The Cross of Jesus: What His Words from Calvary Mean for Us
By Warren W. Wiersbe

In The Cross of Jesus, Warren Wiersbe turns his attention to the central message of the Christian faith. Looking from Jesus' perspective, Wiersbe contemplates how Christ approached the cross, why he died, and what his words mean to us.

“On whatever subjects I may be called to preach, I feel it to be a duty which I dare not neglect to be continually going back to the doctrine of the cross—the fundamental truth of justification by faith which is in Christ Jesus.” ~Warren Wiersbe

Biography
Warren W. Wiersbe is best known as a Bible teacher, author, and conference speaker. He has ministered in churches and conferences in , Central and South America, Europe, and the . He has published more than 150 books and was awarded the Gold Medallion Lifetime Achievement Award by the Evangelical Christian Publishers Association.

This book is a rare gem among Christian literature. Something to read again and again. A true devotional for daily life.