How We Got the Bible 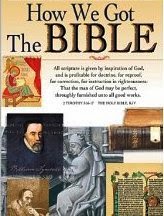 ONE BUCK BOOK: How We Got the Bible
From Rose Publishing.

How We Got the Bible - increase your faith in the reliability of the Bible
Few stories in history are as amazing and as touching as the story of how the Bible was written and became the book we have today. How We Got the Bible will take you through the remarkable story that shows the faithfulness, courage, and sacrifice that was required to make the Bible available to us today.

How We Got the Bible eBook can be read in 30 minutes or less and includes:
• A time line of events and people in the history of the Scriptures
• Examples and illustrations of ancient writing materials
• A look at the variety of Bibles available today
• Inspiring stories of early translators who gave their lives to translate and print the Bible, including William Tyndale, John Wycliffe, King James, Erasmus, and Johann Gutenberg
• Why the Dead Sea Scrolls give evidence that the Old Testament was transmitted accurately through the years

How We Got the Bible provides:
• Ten key points on how we got the Bible
• Illustrations of ancient documents created on papyrus and fine animal skins, as well as the first printing press
• A time line that follows the emergence of the Scriptures, beginning in 2000 BC, and each major step taken in publishing the Bible through 2000 AD

How We Got the Bible will encourage every believer and will increase your faith in the reliability of the Bible. The eBook reveals how the Old and New Testaments were communicated through a variety of forms, beginning as early as 1500 BC when they were written on stone, clay and leather, and later on papyrus and fine animal skins. How We Got the Bible presents solid reasons we can trust the reliability of the Bible: for example, how earliest Bible manuscripts were intricately copied by hand and how ancient texts, such as the Dead Sea Scrolls, validate the earliest manuscripts.

How We Got the Bible is a fascinating eBook that will solidify your trust in God’s word and increase your faith in God.

"Without [How We Got the Bible], I can only cite one truth with certainty - that is, 'God is God! He created the whole universe and if He can do that He can certainly preserve His word' - and He has done that. For some that will be enough, but if your listener is still skeptical, this booklet is priceless.