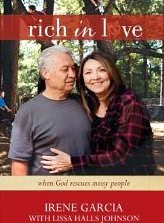 One Step of Obedience Led to Thousands

Irene and Domingo Garcia began their married lives at sixteen, already expecting a baby. Their first ten years together included Domingo’s alcoholism and abuse, and Irene’s desperate prayers for answers. Then a miracle happened: Domingo pleaded for forgiveness. As God healed their marriage, Irene and Domingo adopted a little girl. And a new season began for an imperfect couple who were willing to say yes to each other and to God.

Over the past forty-five years, the Garcias have birthed, fostered, or adopted thirty-two children. Their story holds difficult endings as well as promising new beginnings. Above all, their story reminds us what can happen when ordinary people submit to God’s call.

Rich in Love is about a family cemented in hope. About a need to love the orphan. And about a God who never, ever gives up.

The Garcia's have such a beautiful story and they tell it so honestly, life can be messy, hard, and wear your down, even if you are following what you believe. It's inspiring to hear a story where everything is not always perfect and people make mistakes and still God uses them.