They Shall Expel Demons: What You Need to Know about Demons--Your Invisible Enemies 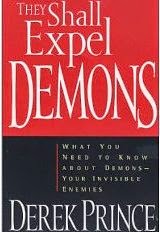 FREE BOOK: They Shall Expel Demons
By Derek Prince

From the Back Cover
WHAT ARE DEMONS?

HOW DO DEMONS GAIN ENTRY INTO PEOPLE'S LIVES?

DO CHRISTIANS EVER NEED DELIVERANCE FROM DEMONS?

In this readable, biblically based book, Derek Prince answers these and many other vital questions. If you are struggling with problems that never seem to go away, has it ever occurred to you that demons may be at work? Or perhaps you want to help others with such problems.

Derek Prince points out that "Jesus never sent anyone out to preach the Gospel without specifically instructing and equipping them to take action against demons in the same way that He Himself did."

If this is not true today, Prince asks, "Who has change? Jesus? The demons? The Church?"

About the Author
Derek Prince (), founder of Derek Prince Ministries International, wrote more than fifty books. He was educated at and and studied Hebrew and Aramaic at and at the in . His daily radio broadcast, Derek Prince Legacy Radio, still reaches listeners around the world.

As a traditional, Southern Baptist pastor I had heard little teaching (even in three years of Baptist seminary) on the subject of demons. Like most evangelicals, I accepted by faith the scriptures on Christ casting out demons. However, I saw little relevance to the practice today. After all, I had been told often that it was only for the New Testament era. (I thought). This book was an eye-opener.

It is Biblical, and conservative in its tone and teaching. It is also real. It highlights the active presence and purposes of demonic forces today, but most importantly, how the believer in Jesus Christ can deal with them in the authority of Christ. How I wish the evangelical world would take the presence and activity of demons seriously. Perhaps more will, through this book.