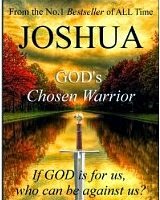 Joshua is undoubtedly one of the strongest characters in the Bible, being a courageous warrior and humble servant of God.

He served as a slave, a spy, an assistant and a military leader in his time, but maintained his unique relationship with God throughout his life, which makes him a role model for any Disciple of Christ today.

His story begins on Moses's side on , where it is believed that he had the honor of witnessing God's incredible delivery of the Ten Commandments. He was then selected as the commander of 's first battle after the Exodus, which he executed with strength, faith and obedience to God.

When the Israelites approached the borders of the Promised Land, Joshua was one of the twelve spies sent out to survey the land, and one of the only two spies who believed that, through God's power, they were able to conquer it. The inhabitants of the terrifying giants and the high walls of the royal cities in did not cause Joshua to fear, but rather inspired him to be strong and courageous, ready for war.

Through Joshua's story we are able to learn the discipline, obedience, patience and strength that it takes to become resourceful servants of God's Kingdom, which prepares us for the supernatural kingdoms and powers that we are required to conquer today.

These are some of the questions that you will be able to answer after reading through this book:
- Who appointed Joshua as the leader of ?
- Why was Joshua allowed to enter into the Promised Land?
- How did Joshua lead his nation across the ?
- Why did Joshua kill men, women, children and animals in ?
- How did Joshua conquer the cities of , Ai and ?
- Who did Joshua sign a peace treaty with in Gilgal?
- What did the Israelites eat and drink on arrival in their new land?
- And many more!