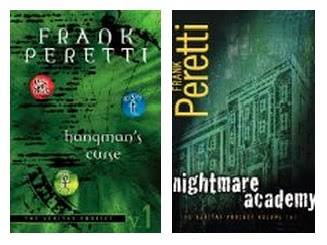 Trouble is brewing in Baker, Washington. Three popular athletes have been stricken with a mysterious ailment--or phenomenon--that leaves them ranting incoherently, paranoid, and eventually comatose. Ever ready to seek truth and justice, teen twins Elisha and Elijah and their parents hop in their van, the Holy Roller, and head to .

As members of a top-secret presidential investigative team, the Veritas Project, the family must be prepared to go undercover at any moment. Soon they are deeply embroiled in a deadly mystery that involves witchcraft, bullying, the ghost of a boy who hanged himself long ago, and a most diabolical weapon.

Frank Peretti, well known for his Christian thrillers (This Present Darkness/Piercing the Darkness, TheVisitation, etc.) draws from his own experiences of not fitting in as a child to create this alarming tale of vengeance.

The twins and their parents occasionally turn to their faith for guidance, but the crux of the story lies in the danger that comes from treating less cool kids like second-class citizens. References to the tragedy at Columbine remind readers just how painfully real the problem is.

From Publishers Weekly
Peretti, long praised for his popular Christian fiction for adults and his strong storytelling style, here turns his talent to young adult fiction with a quick-paced thriller about the evils brought by bullying and intolerance. When the star athletes of a Washington state high school are struck down by debilitating hallucinations, the Springfield family (Nate; his wife, Sarah; and teen twins Elisha and Elijah) go undercover to investigate the mystery.

The Springfields operate independently, as the Veritas Project, guided by their Judeo-Christian faith to seek the truth behind strange occurrences. They even have a mobile home nicknamed the Holy Roller. But this setup never seems overly corny in Peretti's hands. As the slightly chilling story unfolds, readers learn about the ghost of Baker High a boy named Abel Frye, who supposedly hung himself in one of the old hallways in the 1930s.

Throughout, Peretti paints a realistic picture of the clique-y world of high school that will be familiar to just about anyone. His comfortably paced, compelling performance consistently draws readers along. Peretti has an obvious knack sure to appeal to his intended tween and teen audience for emphasizing his beliefs without preaching.

Get your Kindle reader here:
http://nwp.link/FREEKindleApps